In an interview with IPS Mr. Sanjay Patil it was noted that 81 out of the 82 SRPF from Dhule who were posted in Malegaon have tested negative for COVID-19. 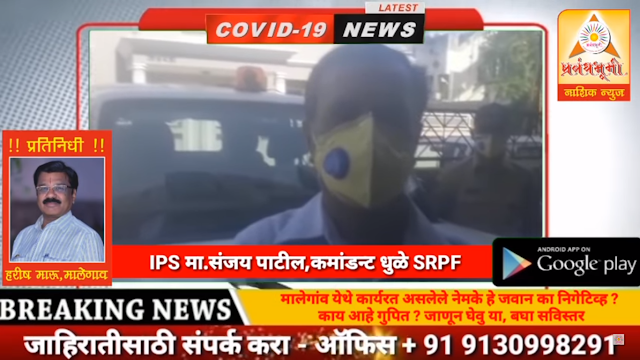 IPS Mr. Sanjay Patil, mentioned in the interview that, "With previous experience of Homoeopathy medicine and their therapeutic value in the epidemic of Swine Flu and Chikunguniya, we started Homoeopathic prophylactic in this group from March 2nd week onwards. Under the able guidance of Dr. Ulhas Pagare and Dr. Jaswant Patil this activity was conducted. All SRPF workers also did take due precautions."

SRPF from Dhule were tested negative for COVID-19 after having worked in Malegaon. 81 SRPF jawan had taken the Homoeopathic prophylactic dose as prescribed by the doctors but 1 did not take the prophylactic hence he was tested positive.

With the rising figures of COVID-19 positive people in Malegaon being an alarming situation, this news about the SRPF jawan is a shining star and a new ray of hope.

Kusumbe and Morane Village of Dhule District have been adopted by the foundation and also have been shielded with Homoeopathic medicine and other health check up camps.

Along with completing their duties towards safeguarding the area these SRPF jawans also lend their humanitarian support to the Surat returned workers, they distributed about 7500 food packets and SRPF paid in from their wages in this noble cause along with duty.

Homoeopathic medicine have also been distributed to Jalgaon and Nandurbar Police as a prophylactic treatment in this pandemic.